A Practical Guide to Bitcoin

Over the past decade, cryptocurrency has grown in popularity, yet it’s still “cryptic” to many. As the foundational and most popular cryptocurrency, understanding the basics of Bitcoin can help you unravel the riddle of crypto.

Bitcoin (with a capital B) is an all digital, all online, and fully public process of trading bitcoins (with a lowercase b).

A bitcoin is not a placeholder for any real world object; it exists digitally. The only way bitcoins have value is if users exchange them on Bitcoin for real world services.

The Core of Cryptocurrency

Bitcoin is the first and most successful form of cryptocurrency. Over 18,000 other cryptocurrencies have been created since Bitcoin (most without success). Some try to mimic Bitcoin, while others look to improve and expand the scope of what cryptocurrencies can do, but all cryptocurrencies are built around the core ideas of Bitcoin.

Bitcoin popularized the “blockchain.” A “blockchain” is a huge digital record that tracks transactions. The “block” is the current chunk of transactions being processed. Blocks are added to the “chain,” which is the long list of blocks going back to the first transaction. Every transaction on the blockchain is public, but they don’t contain identifying information.

There is no traditional registration process needed to trade cryptocurrencies. To start trading you need to create a digital “wallet” for the currency you want to trade.

The Private Key: This is a unique 64-character string of letters and numbers randomly generated by the wallet owner. The only way to access and trade from the wallet is by using the private key.

There are several resources online that can help create private keys, public addresses, and manage wallets for different cryptocurrencies. These might charge a fee or require personal information.

The level of security can vary between cryptocurrencies, but Bitcoin set the standard of security and reliability by verifying every transaction with a network of “miners” (computers which verify transactions and update the blockchain from all around the world who compete for bitcoins in exchange for maintaining the blockchain). With enough miners the process becomes extremely secure.

Anyone participating in Bitcoin can have confidence that their transactions and wallets are safe as long as they protect their private key.

Quick recap: Bitcoin (capital B) is the system, and bitcoin (lowercase b) is the currency.

Can you lose bitcoins?

The biggest breaches in security come from private keys being stolen (often by hackers accessing keys stored digitally) or lost (keys saved on old hard-drives that are no longer accessible or physically recorded and then misplaced). The only way to access a wallet with bitcoins is by knowing the private key. There is no system within Bitcoin that can recover the private key or even verify the original owner.

Tenth of a bitcoin

The true identity of Bitcoin's creator/creators has never been revealed, but there is an underlying philosophy behind its early adopters. Initial Bitcoin users were willing to trade the valueless bitcoin because it represented a financial system that was free from banks and governments, a cause they believed in.

Over time the popularity and value of bitcoins has grown and reached world wide attention.

Bitcoin has proven itself as a viable technology capable of reliably making hundreds of thousands of trades a day—but as an actual currency, bitcoin has not been successful.

Bitcoin lacks the widespread acceptance and stability of a typical currency. While Microsoft and a few other large companies accept bitcoins as payment directly, most day-to-day transactions like grocery shopping, bill paying, and leisure activities can’t be paid with bitcoin. Vendors are hesitant to deal in bitcoin because processing times are slow (no one wants to wait at a table for ten minutes while the blockchain verifies their bill has been paid) and the price is unstable. 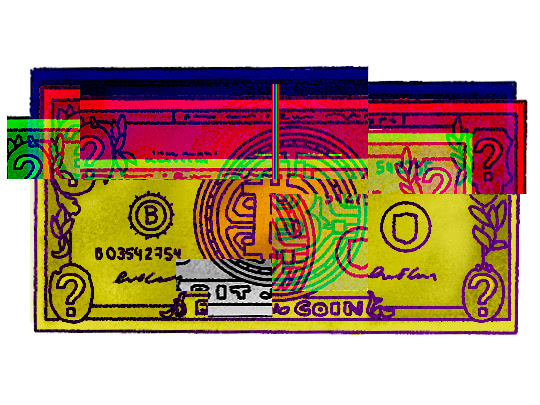 Because bitcoin prices fluctuate significantly and have little advantage over other widespread currencies its use is limited.

While it fails as a currency, Bitcoin has had success as an investment. It was designed to only supply 21 million total bitcoins. Because the supply is limited, if the demand for bitcoins increases then the price of bitcoins increases. As the price increases, more investors are buying and promoting bitcoins to drive the prices even higher. This has caused the market value of bitcoin to skyrocket over the past few years.

Bitcoin is extremely volatile and sensitive to unpredictable forces. It’s a risky investment with wildly fluctuating prices. Governments concerned about the impact of Bitcoin can ban its use outright, plummeting the price overnight. Investors eager to avoid missing out drive the price high, leading to inevitable mass selloffs and price crashes.

These fluctuations provide drama for news articles, but make it impossible to guarantee a return on investment.

Bitcoin and cryptocurrency have an interesting underlying technology that could be useful in the future, but the current urgency to get on the boat before it's too late is for a boat that hasn’t proven it can float yet.
Disclaimer
While we hope you find this content useful, it is only intended to serve as a starting point. Your next step is to speak with a qualified, licensed professional who can provide advice tailored to your individual circumstances. Nothing in this article, nor in any associated resources, should be construed as financial or legal advice. Furthermore, while we have made good faith efforts to ensure that the information presented was correct as of the date the content was prepared, we are unable to guarantee that it remains accurate today.

Neither Banzai nor its sponsoring partners make any warranties or representations as to the accuracy, applicability, completeness, or suitability for any particular purpose of the information contained herein. Banzai and its sponsoring partners expressly disclaim any liability arising from the use or misuse of these materials and, by visiting this site, you agree to release Banzai and its sponsoring partners from any such liability. Do not rely upon the information provided in this content when making decisions regarding financial or legal matters without first consulting with a qualified, licensed professional.
Related Content
Link to resource.
article

Saving
4 min read
Stock Market Basics
Learn how to buy & sell stocks so you can start investing your money.
Link to resource.
article

Budgeting
2 min read
The Upside of Frugality
Frugal living not only saves you money, it pays huge dividends. Is a penny saved really a penny earned? Or is there more to it?
Link to resource.
article

Retirement
4 min read
Portfolio Building
Variety isn’t just the spice of an investor’s life. It’s an essential ingredient.
Banzai interactive courses are fun and free. Go ahead.
Already have an account? Log In.
Sign Up