You may have heard of NFTs (non-fungible tokens) before—maybe not. Either way, owning an NFT is not the same as owning a real world piece of art. So what exactly does it mean?

NFTs, or non-fungible tokens, are tokens (unique lines of code) that can be traded on a cryptocurrency blockchain.

A blockchain is a digital record used to keep track of cryptocurrency transactions (Learn more about them here).

Cryptocurrency, like physical currency, is fungible. Anything fungible can be replaced by a copy that is practically identical. So every dollar bill has the same value of any other dollar bill, and every bitcoin is the same as any other bitcoin.

NFTs’ uniqueness is what makes them non-fungible. Anything non-fungible can’t be replaced by a copy and be considered the same. NFTs are like digital snowflakes where each one is unique, each token can only be owned by one person on a blockchain.

Anyone can buy NFTs, and those that do usually hope that the NFT they buy will rise in value. Because NFTs are traded on the blockchains, they are bought and sold using the blockchain’s associated cryptocurrency. That means you have to buy cryptocurrency with real world currency to start buying and selling NFTs

Not all cryptocurrency allow NFTs (including Bitcoin, the most popular cryptocurrency), and most are traded on the Ethereum blockchain.

Blockchains rely on redundancy with hundreds of verifications. Each time an NFT is traded it has to go through the verification process. That means the NFT must be sent to hundreds of different computers. So the smaller the NFT the more efficient it is to verify.

Entire images or video files are too big to be traded. Because it’s inefficient to have the entire image, the NFTs people are buying are actually urls that point to larger digital files.

This means most NFTs are like digital plaques that name and describe the artwork, not the artwork itself. For instance: a popular NFT trading site could host a series of images on a web server. The NFT is only a url (less than a hundred characters long) that points to an image (more than a million characters) on the server. 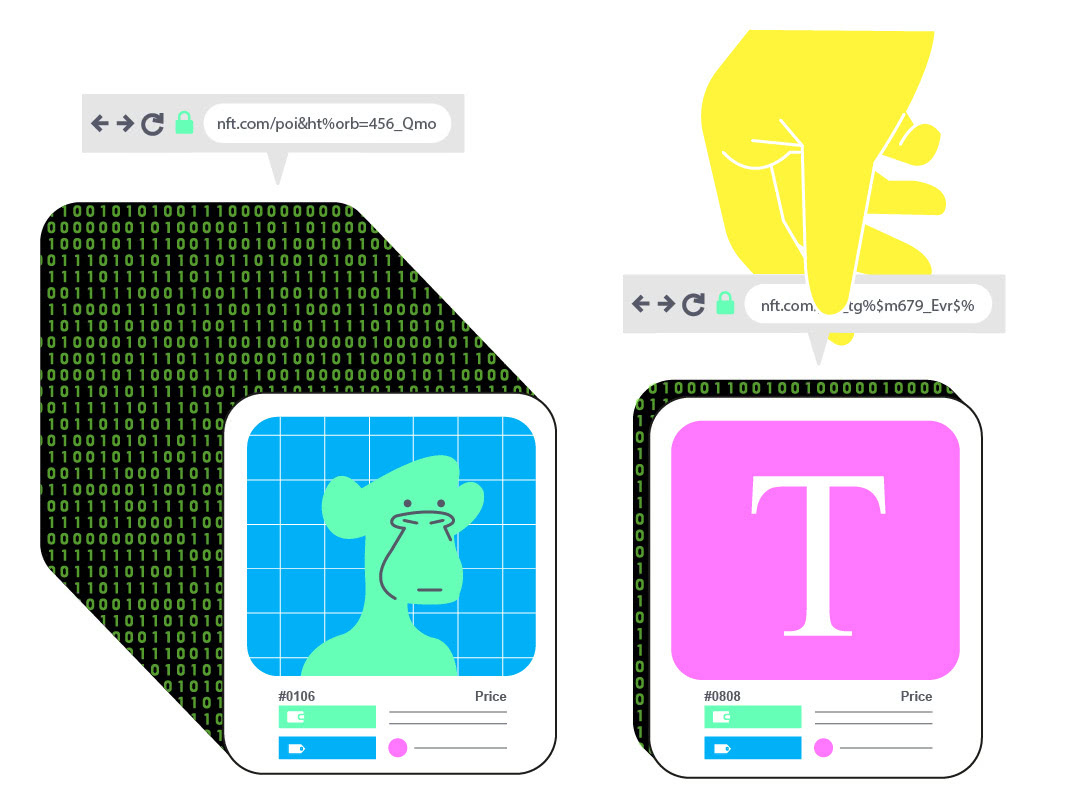 Because the NFT is only a url that links to a file, the person who bought the NFT:

What are NFTs Worth?

The worth of the NFT is mostly driven by hype. They only have the excitement of people selling NFTs to drive up their prices.

This excitement mostly comes from NFT community sites that host hundreds of images with similar themes. These community sites have the same appeal as collecting real world items like stamps, baseball cards, or Beanie Babies. Some sites even allow users to create and upload their own homemade images to sell. The community aspect is one of the big parts that attract people to NFT trading.

In order for an NFT to raise in value, not only does it need excitement for NFTs in general, it needs excitement for the particular file it points to. Even if the cryptocurrency used to trade the NFT gains more value, most NFTs will only lose value over time and the vast majority have no value at all.

NFTs are trendy and appeal to being a part of a community. They work well as a marketing tool that persuades people to buy items of very little value.

NFTs can be bought at a low price and sold at a higher price, but the real winners in the NFT world are those that create and own the digital files the NFTs point to. They can sell them to people who want to say, “Look I own a placeholder for a cool thing on the internet.”

Disclaimer
While we hope you find this content useful, it is only intended to serve as a starting point. Your next step is to speak with a qualified, licensed professional who can provide advice tailored to your individual circumstances. Nothing in this article, nor in any associated resources, should be construed as financial or legal advice. Furthermore, while we have made good faith efforts to ensure that the information presented was correct as of the date the content was prepared, we are unable to guarantee that it remains accurate today.

Neither Banzai nor its sponsoring partners make any warranties or representations as to the accuracy, applicability, completeness, or suitability for any particular purpose of the information contained herein. Banzai and its sponsoring partners expressly disclaim any liability arising from the use or misuse of these materials and, by visiting this site, you agree to release Banzai and its sponsoring partners from any such liability. Do not rely upon the information provided in this content when making decisions regarding financial or legal matters without first consulting with a qualified, licensed professional.
Related Content
Link to resource.
article

Saving
4 min read
Stock Market Basics
Learn how to buy & sell stocks so you can start investing your money.
Link to resource.
article

Budgeting
2 min read
The Upside of Frugality
Frugal living not only saves you money, it pays huge dividends. Is a penny saved really a penny earned? Or is there more to it?
Link to resource.
article

Budgeting
9 min read
A Practical Guide to Bitcoin
Bitcoin and cryptocurrency, without the math and the hype.
Banzai interactive courses are fun and free. Go ahead.
Already have an account? Log In.
Sign Up